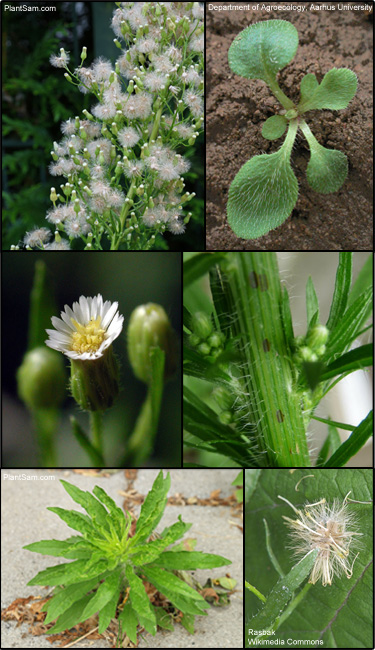 Description: In 2001, it was the first reported weed to have developed a resistance to glyphosate.

Habit: Erect annual with a long taproot and 1 or more stems arising from a basal rosette.

Leaves: Narrow, 4 in. long and less than 1/2 in. wide, smaller as the ascend the stem, edges covered with stiff hairs, toothless, little or no stalk, alternate and crowded.

Stems: Erect, unbranched except near flowers, stout, covered in stiff hairs, may fall from weight of flowers.

Fruit and seeds: Light brown in color with a tuft of light brown hair.

Monitoring and rapid response: Satisfactorily controlled by tilling, hand-pulling and crop rotation. Other methods of control have been living mulches of Trifolum subterraneum. Resistance to paraquat and triazines. Biological control with the help of tephritid Procecidochares australis. Credits: The information provided in this factsheet was gathered from CABI: Invasive Species Compendium and Minnesota Wildflowers.