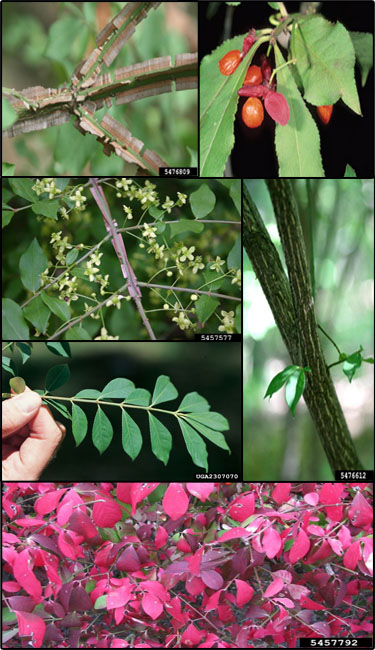 Description: To this day, it is still used in landscaping as an ornamental.

Habit: Deciduous; growing up to 15-20 ft in height and in width; multiple stemmed with a broad closed crown; angular branching.

Leaves: Elliptic leaves are simple, opposite or sub-opposite; 1-3 in long and 1/2 to 1 1/4 in wide; finely toothed margins. Leaves turn a bright red in the fall before dropping.

Stems: Green to brown in color; multiple; angular; two to four corky ridges or "wings" often form along the length of young stems.

Monitoring and rapid response: Hand-pull seedlings up to 2 feet tall; cut or dig out larger plants; root systems can be removed with a spading fork or pull with a weed wrench; ground out stump and paint with glyphosate immediately. Can be effectively controlled using any of several readily available general use herbicides such as glyphosate, imazapyr, or triclopyr. Credits: The information provided in this factsheet was gathered from the National Park Service and the U.S. Forest Service.