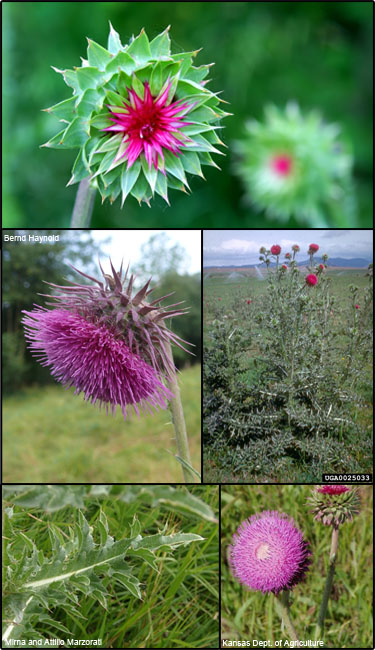 Description: Accidentally introduced into the United States in the early 1800s. It was first discovered in Davidson County, Tennessee in 1942. This species is listed as a prohibited noxious weed by the Michigan Department of Agriculture.

Habit: Herbaceous, aggressive herb; grows 1.5-6 ft tall and has a single taproot. Thistle species may hybridize with each other.

Leaves: Dark green in color, coarsely lobed, with a smooth waxy surface and a yellowish to white spine at the tip.

Stems: Very spiny wings, multi-branched and ranging from 1 1/2 to 6 ft in height.

Flowers: Large, disk-shaped flowerheads containing hundreds of tiny individual flowers, 1.5-3.5 in in length, occur at the tips of stems, droop to a 90-degree angle from the stem when mature; blooms June through October.

Fruit and seeds: Produces thousands of straw-colored seeds adorned with plume-like bristles by which the plant reproduces.

Reproduction: By seed; plants have a single taproot.

Similar species: Spiny plumeless thistle (Carduus acanthoides) which has flowers that are one-third the size and not nodding, underside of leaf is hairy.

Monitoring and rapid response: Hand-pulling is most effective on small populations, can be done throughout the year but most effective prior to seed development. Effectively controlled using any of several readily available general use herbicides such as glyphosate or triclopyr. Also, two weevils, the thistlehead-feeding weevil and the rosette weevil have been introduced and has shown notable success (but this may impact native thistles). Credits: The information provided in this factsheet was gathered from the U.S. Forest Service.